Maggie and I made a ‘line’ book during our first year in Europe when we started this new life of ours, now in its third year. That book made it the whole 365 days and was a daily challenge and also fun. The concentration, the materials, the unexpected lines that appeared, all proved that the very simplest gesture – a line – could sustain our interest for a whole year. 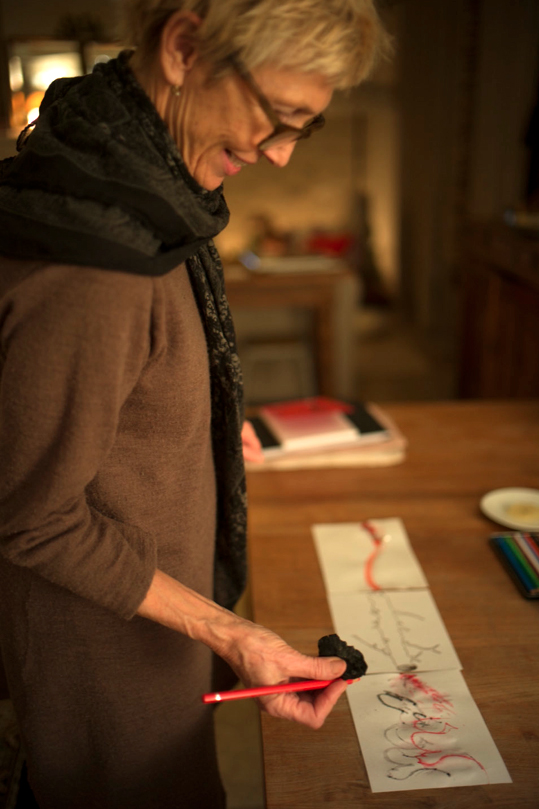 When Maggie and I moved to Europe two years ago we decided to make a project together by alternately drawing a simple line across a piece of paper, and then the next day one of us would continue that line from wherever it ended on the sheet. We did it for 365 days. Here is the run of days at this time 2 years ago. Seeing all 365 laid out around a room becomes an amazing journey.

Speeding south from Paris on a rain slashed day, the fields monotone, the light heavy, with occasional flashes of brilliance compared to the overall density. These glimmers seemed to be   of possible interest, since at 100 plus miles an hour they are visible and gone in a fraction of a second. And the camera can handle that, just barely under these condition, so I was watchful for these tinkling moments, and the way the power lines rise and fall in the window, and then, there it is!

Back in Bonnieux Maggie visits a friend, an antique dealer, to pick something up, and while I’m waiting I watch the little theater that presents itself. It always pays to stay open to the chance that ordinary moments offer. First I saw the lovely quality of the light inside, and then how animated he was, so French, I thought, and then, a step to the left and the mirror added another dimension, and all the while I’m feeling myself smiling at the pure, simple pleasures any day can bring. 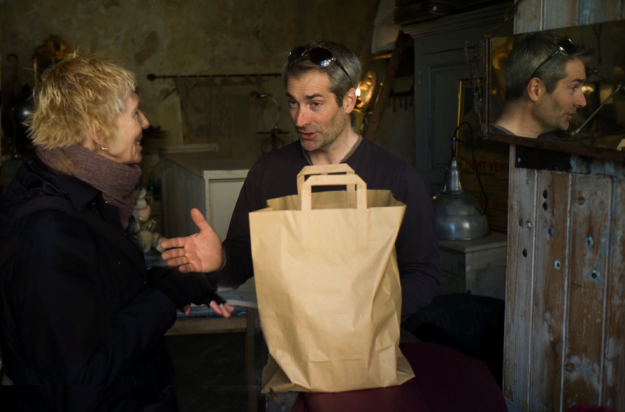 For some reason when I saw this head in a local library it reminded me of the Gallic quality of the antique dealer in the image above. Not that it really looks like him, but that it played on my eye that way, and caused me to respond. In that way images accrue over time and have their own strange linkages later on in the editing process. It also made me aware of certain facial characteristics in that part of Provence. It’s not stereotypes that I see but heredity, and the  feeling that at one time the tribes of that part of southern France blended in a way that produced the look one sees there.

After dinner we ventured out to be in the stillness of twilight. The fading of the day brings out tones and colors that the eye works hard to discern, but there are advantages to today’s technologies. The Leica has such a delicate system that the most subtle luminance can be described even at times when one might think, ‘I won’t be able to get this.’ But it’s not the case any longer and I find real pleasure in seeing into the oncoming darkness. 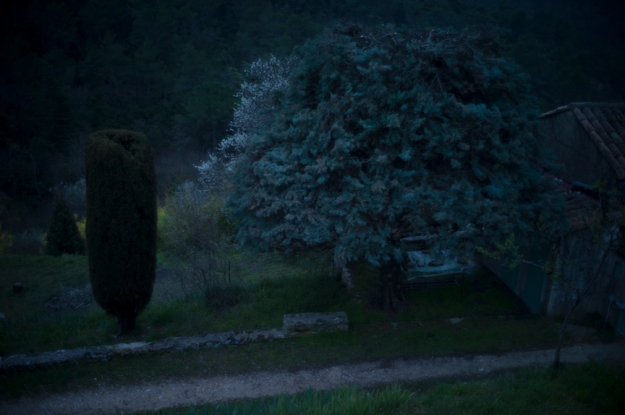 I used to be critical of the kind of ‘design in mother nature’ images that popped us so easily, as if it was without merit to see something that was simply beautiful in and of itself. But I don’t feel that way after all these years of seeing. Sometimes the ‘thing itself’ is just there; complete and generous in the way nature and time have woven their strands and left remarks of simple beauty.

Inside a church crypt, in a tiny roadside hamlet, we stumble into this subterranean thriller. Even without a sound in the space we heard the music

When things get put together like this chance combo of car and bin, who can resist? Odd couples abound in life, and when a day brings me into this kind of encounter I always say Yes!

Sometimes the liveliest things on the street, especially in a small town in Provence where no one ever seems to be around, are the vestiges of inanimate things that suddenly appear. My way of working is to respond to whatever comes up for me out of my passage through time and space. It could be nearly meaningless, ordinary, dumb, or unlikely to be of greater interest later on, it doesn’t matter, it is the only thing that is speaking to me at that given instant, and that is what I have to work with.

Anything that makes me pay attention, even for just a moment, is one more moment of consciousness, and once again a trickle of playful energy occupies my mind. It is this willingness to make something of nothing that primes my senses for whatever may follow that moment. I find that if I do not play when something calls to me then I lose my edge, soI let myself be taken in, and I play. And by doing so my innocence is capable of being prompted by the unexpected when it next shows up.

And we know that as we get older the innocent joy of discovery gets whittled away by all the other responsibilities that life throws at us, which distracts us from that state of play. So a moment of open ended curiosity, and the freedom to see in a care less way, is a gift we must not turn away from.

We are now 25 days into our line project and just today we saw the scale of the task we set for ourselves. How are we ever going to keep being inventive with the simple stroke of a line as our subject? We laughed when we recognized the futility of any resistance to the subject and the project. This is in the name of fun we agreed, a no-holds-barred kind of fun, where we can throw away any doubt that arises.

Perhaps it was actually seeing what variety we have already made that gave us doubt about our own capacities to add more to it, but after a few minutes of looking at the pages we felt better about the effort and the results so far.

So we’ll step forward one stroke at a time and watch the slow accumulation of the line as it dances across the pages and through our time in Europe. 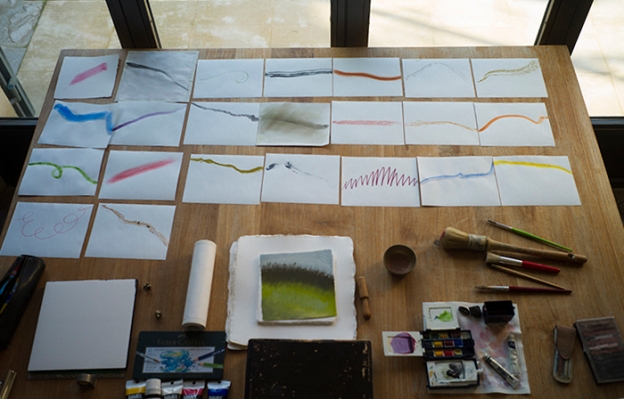 When Maggie and I finished our book on Provence we wanted to do a project together that might carry us through our year in Europe. Something that would give us an opportunity to step out of our roles as photographer and writer. The idea that first came to us (while sitting in the bath, actually) was; ‘let’s each make one line every day’, alternating daily, and where one line ends on a sheet of paper the next line must begin. This mute, meditative moment allowed us to choose whatever we wanted to use to make a line; paint, ink, charcoal from the fireplace, fruit, grass, blood, whatever was handy and felt right. In that way we could both collaborate and duel, respond and challenge.

We did it every day for a year! And it now stretches in one continuous line for 220 feet! This image was made as the 3rd line, Maggie’s turn, presented itself.