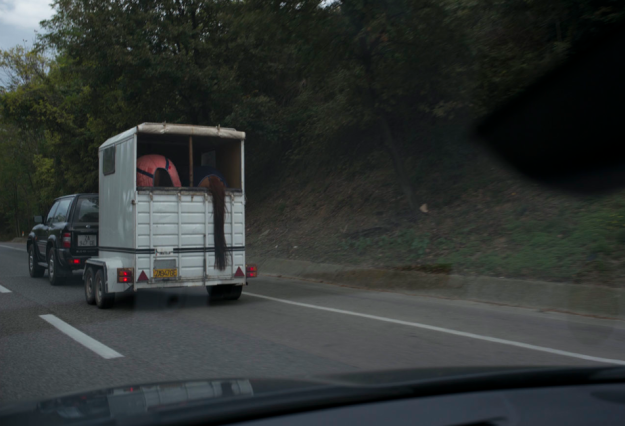 I remember setting out that morning to drive an hour south so we could look at a fireplace that might be built in the house we were renting. The day was, as it often is at this time of year, mist filled in every dip and hollow  and even heavier fog down on the flatlands of this one time sea bottom of a valley. And yet, just 20 minutes from here, when entering the next valley, the sun was out and the micro climate of that place made it into another day entirely.

I was shooting from the car as I often do and realized how frequently the single tree in the landscape appeals to me. 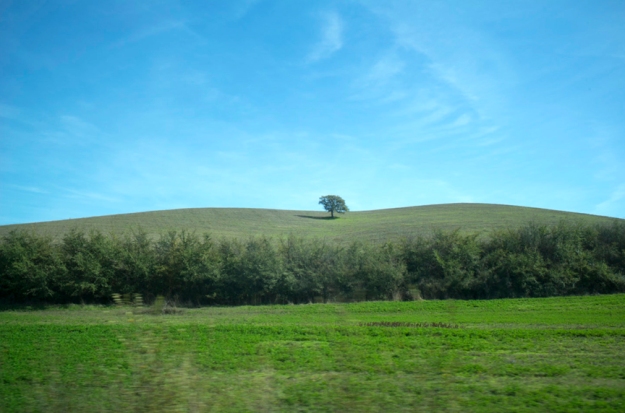 A lazy mist drifted through and over the valleys that the road rolled through, so that at times I was above the clouds and then down under them. It felt a little like flying. And it was dreamy too, in that same way that flight can make you feel when passing through the clouds at 30,000 feet.

Up ahead the mist spooled across the road, and the moment felt timeless. The thing that separated me from the old world, it seemed, were the little pings of reflected light to mark the borders of the road. Out there was timelessness, inside the modern machine, with a camera in my hands, I could make a photograph at 50 mph and still get good quality, and a degree of sharpness that tells me how good our technology really is. It is important to be able to count on it that way and thus not have any fear about what the outcome will be.

I’ve basically used the same equipment for 50+ years. I don’t keep changing cameras, or go into the equipment mind set searching for the latest toys. For me the Leica and a good 35mm lens, and that’s all I need to say what I see, and to stay open to the act of seeing the world freshly.

The stuff that people advertise themselves with! Why this crazy bird? Why so big? Why hang it over a balcony?

I glimpsed it at 50 mph as I slowed down while passing through a seaside town and by reflex I shot it, as I usually do for things that jump out at me this way. Frankly, if it wasn’t the only thing of interest that I saw on that 15th of August, during my ‘picture a day’ work, I’d probably never bother with it. But because something from every day must be acknowledged this is the one that said to me, ‘…have gratitude for small and strange things.” 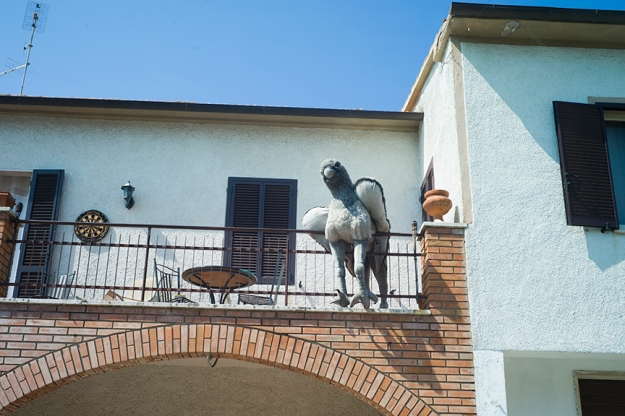 On the way back from Lucca, shooting from the car as I often still do, this earthen berm with a.. …..what is that thing anyway… sticking over the top of the berm like a droopy schnoz, called out to me and made me laugh. The reason I think some photographs have a surreal feeling is that the world is surreal more often than we might think it is. Is this someone’s idea of art? Is it an industrial site with work going on behind the berm and the schnoz lets the gases out?  Is it a lost wind sock from a nearby airport come to earth right there? Whatever it was, it made for a moment of visual excitement, a humorous few minutes of speculation, and the feeling that the world is always giving off unexpected pleasures. If you are willing to see it that way.

By the time we got home the day was producing its own set of miracles, besides arriving home safely. The Tuscan skies, almost as often as the skies over Ireland, produce rainbows of long duration which fall to earth in their own pot-o’-gold, wheat field landscapes. Maggie seems to me to be my very own pot-o’-gold, my good fortune at the end of the rainbow.

I have often thought that habitual, ordinary gestures, create the encyclopedia of forms that define our states of mind, expressions, attitudes, etc. And from the subtle differences in the way each actor performs them we have unlimited opportunities to see them again and again, in ways that add freshness, maybe even originality, to the interpretation.

Here, at 60 miles an hour, the relaxed hand of the driver could have been in the same pose were he sitting at home on his couch watching the football game. However, as I passed him (my wife was driving) I noticed that in the overall grayness of the day, and the monochrome of the cab and its paint job, the fleshiness of his hand became the live element of the frame within the frame within the frame.

Small touches, almost nothings, can often be the telling moment that makes me alert to seeing, even while being in a moving car at 60 milers an hour.

The road offers so many opportunities to see what the world looks like from a moving car; the roadside, the machines that travel on it, the people that make their way along it, the landscape we pass by, moments that make us wish we could stay and become part of what we see, or not.

On the second part of the trip from France to Italy, the part from Camoglie to Buonconvento, lots of strange and beautiful moments appeared. Here are two that seemed to frame the trip. The one a yellow box on wheels, and the other the last 200 yards before we hit home. I know where I want to be.

The world often throws metaphors, similes, analogies, and other language cues out to us in its own effortless manner, all we have to do is be alert to the throw and the camera becomes a great catcher’s mitt. Since baseball season has just begun perhaps that is an apt metaphor.

The simile here, was breathtaking in its simplicity even at 60 miles an hour. I got it in a blink.  The cloud of cherry blossoms and the oncoming layers of mist and cloud rolling down from the cold reaches of the hills beyond, into the warmth of the valley. 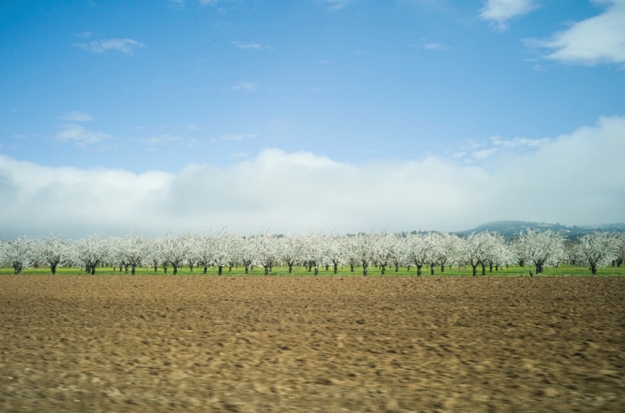