This was a day of generosity. In a nearby small town I came across this beautiful bunting wrapped, church doorway. No doubt ready for a procession for a saint’s day, or a wedding, or who knows what festive event the town was making, but it made me happy just looking at the way the space was redefined by some simple fabric hanging on the facade.

Then, returning home, a bounty of offerings appeared; Silvia came by with a cake she just baked, then her mother-in-law stopped by with some fresh ricotta she had made from the new sheep they recently bought, then a man from Buonconvento, on the way to his sister’s place, stopped by to bring us a box of figs from his amazingly productive tree. All that, and some eggplants from the garden, which I roasted and turned into baba ganouj became a summer dinner. And a still life, and a portrait of a building. You work with what you have. 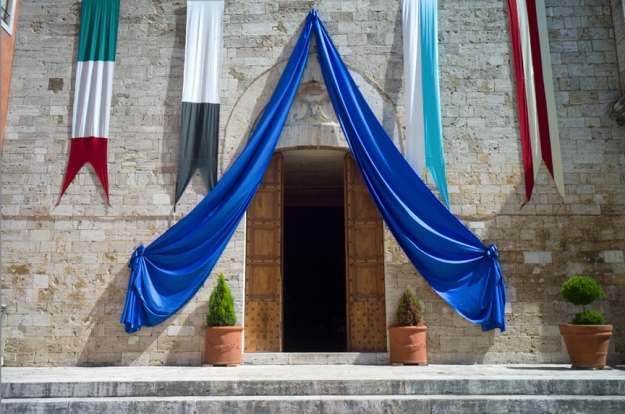 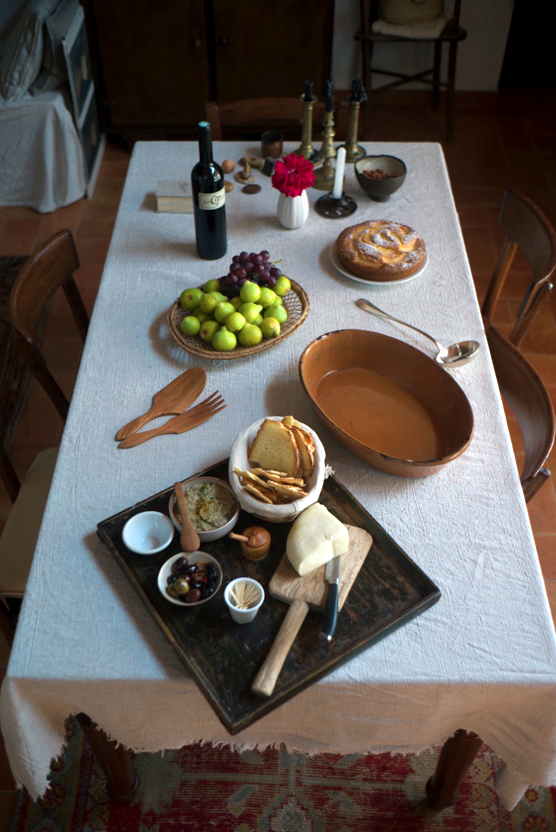 A blistering hot summer day at the Tuscan shore. After a swim and a short nap I opened my eyes and saw the light coming through the umbrella, and then the pure blue of the sky. My first impression was of being under a sundial and that it was around noon, and sure enough, it was.

I love the amazing amount of information, even in such a simple image as this. The difference in tone and color between one side of the white nylon and the other, the subtle density difference between one end of the shadow and the other, the way the sliver of blue hovers above the black frame of the umbrella and then continues beyond. It is this kind of ‘describing’ things to myself that enlivens my attention and keeps me interested in the things that might easily go unnoticed. It’s this ‘paying attention’ that makes photography such a vital form for me. 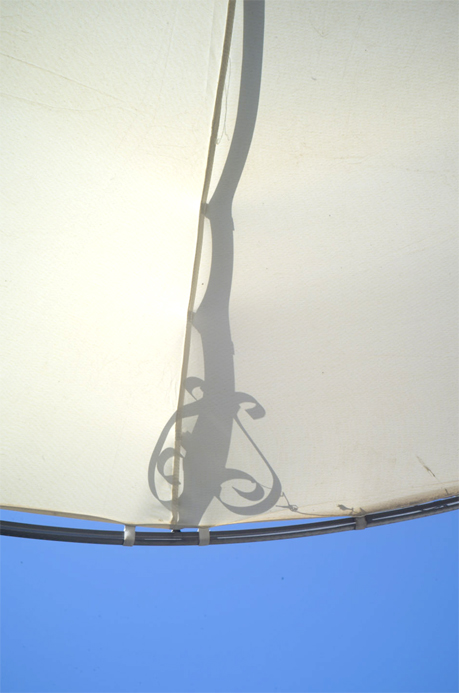 I have long believed that our closest of kin are subjects for our observations just as the outside world is. Whether it is a portrait, a slice of life, or an unguarded moment, or all of them at once, it is essential to being a photographer to pay attention to life close to the bone.

Summertime means simple meals. We were lucky that summer to be eating out of the farmer’s garden nearly every day. A broth of vegetables and lentils, some steamed zucchini, fresh tomatoes, edible flowers to embellish the tops of anything we wished, some locally baked crackers. This kind of eating makes me want to photograph every meal, and sometimes I do. More of a record than art, but simplicity is what it demands.

Some days not much happens.

We went for a walk.

I stopped to look at my own shadow.

The small, ordinary moments that life continually presents, in which I hope to find just a little moment of concentrated observation that would keep the idea of daily imagery going. These are the tough lessons of a project like this one; how to keep interest alive while many other things: books, shows, presentations, all crowd in and eat up precious time. So, as I have said before, “I’ll make the most of what I have.”

I had seen Maggie doing a homey piece of handwork – sewing weights into the bottom of a fly curtain over the front door – and was moved to see such a simple task being done with so much pleasure. She is a real contadini in that way. She loves old methods and the life people led in the past.

When I stepped outside a whole other image presented itself, one a bit more comical, and probably one I might have made on any street, anywhere in the world. That kind of disembodied image that gives off a tremor of surprise that is accompanied by pleasure. 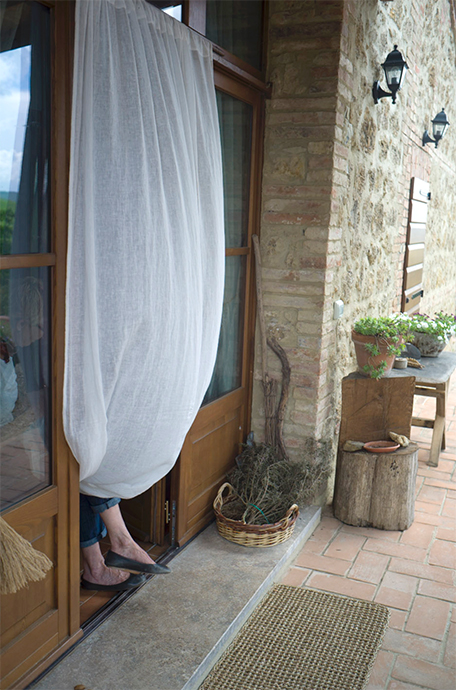 No matter how many times I passed this field the ‘call’ from the space zinged me. And yet there is nothing there that has any remarkable element that defines the space as special. It’s just a low lying field with a scraggly border of mixed trees. No eloquent stand of poplars bending in the breeze, no spreading oaks or cypresses marking the space, no ‘features’ that gave me reason to look again. But I always did.

Perhaps it is this innocent quality that we need to be attentive to in the world at large. The minor note that resonates deep within us and calls us to attention for reasons that remain somewhat undefined or illusive. That way the call is purely from something native within each of us, which is vulnerable to being awakened by simplicity rather than by more formal or intellectual values.

From these lessons a secret may be learned about what it is that constitutes our inner voice when we hear it call out to us from unexpected external sources.

The Wonder of It

The snow bursts of cherry blossoms in the Luberon Valley drove me mad! The scent of the blossoms, their whiteness in the newly warmed spring air, the way they shivered in the faintest breeze, called me in close, as if to stand inside their space was to bring me closer to spring itself.

This search for the essential nature of anything that calls out to me has been my long time practice, and I find that in moments like this I want to be part the experience, not photographing it from the cool distance of the observer, but becoming integrated in it somehow. And this tree – one of many in the long lines of orchard trees – brought me close to that kind of trance state, where I stood, spellbound, and felt as if I could have stayed forever watching the barely discernible flutter of petals, while listening to the steady hum of the bees.

It almost doesn’t matter to me at that point what the photograph looks like in the camera, what matters is keeping the simple wonder of it all alive. 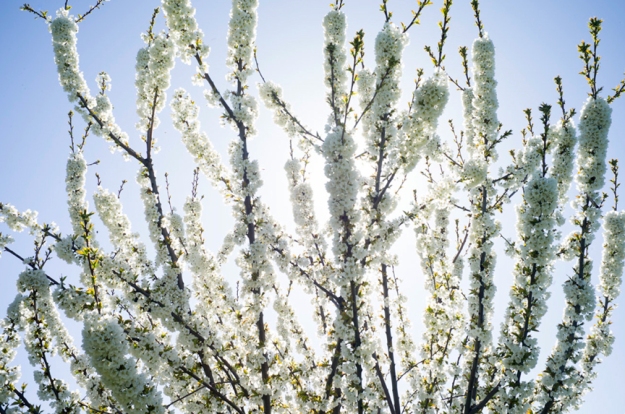 Every once in a while I find myself stopped by some indefinable sensation, as if a have just passed though a ‘locus point’, a zone of visual force that tingles in such a way that I look around to get my bearings. “What is here that is holding me”?  Usually we respond to things that can be defined easily, a space, a tree, some figures doing something, a whole range of sensations that we know how to organize. But when there is nothing as concrete as that how does one make a photograph?

I have learned to trust those ‘calls’. Learned way back when I was first using the 8×10 view camera and working on my St. Louis commission. It happened to me one day right in the heart of downtown St. Louis. Nothing specific, just a feeling that something in the zone in front of me was whispering my name, stopping me from moving on. I remember yielding to the instinct and setting up the 8×10 and waiting to see where the call was coming from.

The image here was pretty much the same thing. Nothing going on but the voluptuous mess of nature. No beautiful arrangement, or scaled relationships, or counterpoint between near and far. Just chaos. Just the indefinite, overall, layered, complexity of nature, as if it had a mind of its own which presented a thought that was purely natural, not within the bounds of the esthetics we have applied to it for centuries of landscape painting and photography, nothing but the rawness of IT. 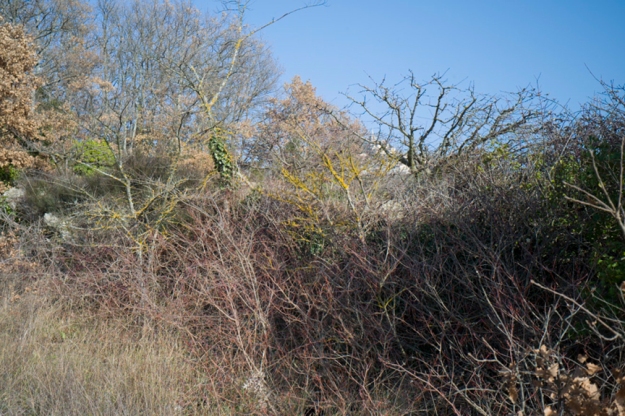 I would like to apologize to some of my readers for a confusion I may have let creep in when writing this blog about the year’s worth of photographs I have made. Sometimes my tense slips between past and present as it did the other day. So let me reiterate again that I finished this work a year ago and then let it sit while I worked on the accumulated days, and then decided to reflect on that passage of time, so perhaps my enthusiasm gets the better of my grammar.

Simple is good! This may be true for food as well as for photographs (even the complicated ones). But I have to say that on a day in February, when the temperature is 60, and the sun is hinting at springtime coming to my neighborhood soon; a couple of cappuccinos, some English biscuits, and some coffee ice cream, eaten in sunlight, sitting next to the woman I love, well, nothing could beat that.

I don’t equate simple with simple things. I think seeing the complexity of the world, in all its varied layers and movements, and its timings, is an amazing feat of observation. And as richly detailed and capable of multiple meanings as it all becomes, both in the reality of the moment, and later in a print, it can still be stated simply. Because if it was understood intuitively, and thus proposed in a direct way, the visual language at your disposal will do all the rest.

Photography is a language. That is something I have always believed. And it takes years of learning the ins and outs of that language, the intricacies of its forms and shadings, the expressive potential of energies that visit you while you are seeing something, which we build and learn over time, until one day you realize that you actually have your own private language. If you have made it a clear and elegant language, you will communicate with your visual voice to all kinds of people. And strangers will understand you, people will be moved by you, some will feel the feelings you experienced. The world will want to see what you have to say.

Isn’t that what we love about photography?