(N.B. Internet failure here prevented this from being posted on the 22nd, there will be 2 today) 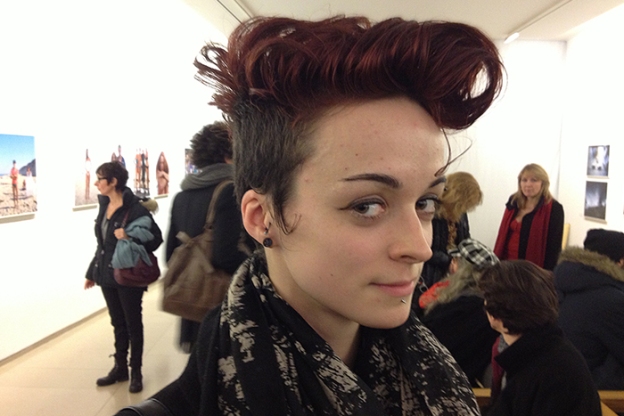 Coincidence, as I wrote about yesterday, now has struck twice in a row. At the opening of my exhibition at MEP who should I have seen in the crowd but that very same young woman from the 19th, she with the glove in her mouth, now standing in the same room as I was. I went over and introduced myself and told her that I had photographed her on the street a few days before, but she had no memory of being seen, which is a testament to my still being able to be somewhat invisible on the streets.

Of course I had to photograph her again, but this time with an iPhone and close up, more, simply a record of her and the fact that our paths had crossed again. She was an art student and was there with friends, but we had a few minutes together to walk through the show and it pleased me to see how much attention her hairstyle and outfit brought her. In a way it gave me a moment of anonymity to enjoy my show in the company of someone who was the attraction while I tagged along.