Years ago when I was on a Guggenheim Fellowship grant I  toured America looking at the way Americans were living while we were in the middle of the Vietnam war. I was also interested in the way we were spending our leisure time, and how the culture was reflected in our monuments and tourist attractions, and I was curious about a lot of other attitudes of that period.

One of the things i noticed was that a lot of our military junk was finding its way into playgrounds, civic spaces, and intersections on highways, to name a few places. Old fighter jets, and missile launchers, armored cars and tanks, the rusting leftovers of the military-industrail complex that Eisenhower warned us against. What I seldom saw was the kind of memorial that The Great Wars of the 20th century produced, those valiant figures helping a fallen comrade, or standing firm against the onslaught, or looking toward the future with some degree of resilience and hope.

When I see these European monuments in small towns all over France I feel the tenderness that those losses addressed. Millions of young men were slaughtered by the incompetence of their war making leaders and the politics of their era. I find it hard to pass these empty plazas and not stop for a moment to read some names, take into account the ages of the dead, be surprised at how many were killed from some of these tiny villages.

On a day when the winter is giving up its bitter edge, human folly still shows its tragic face. 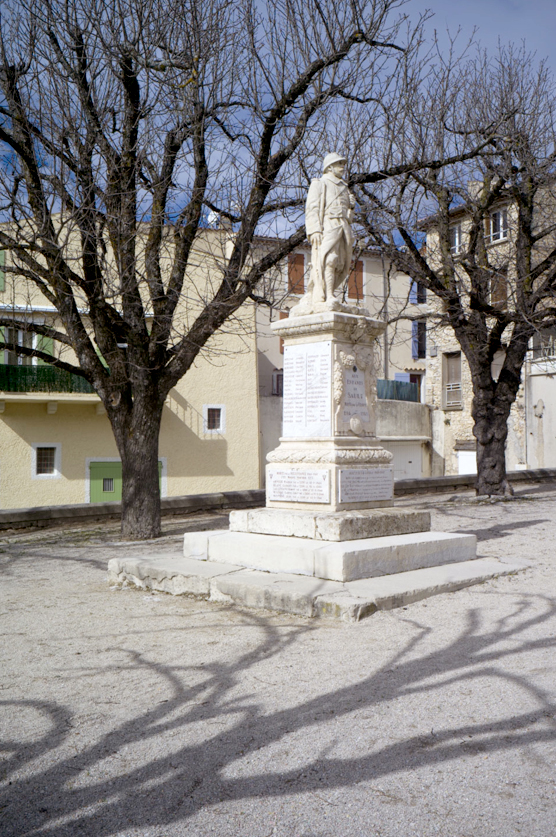