As the Italians say, nulla, niente

Some spaces just ring with authority. Even when they might be just a small neighborhood chapel, or a convent, or school, or some old ruin that has the aggregate of time on its side. Coming into this neighborhood in Siena I was surprised at how the building and the ‘wings’ of the subtly curving street so perfectly related to the two doorways of the church, one with that seashell with a madonna or saint, and the other with the wings over it.

Little moments of pause and reflection have been the part of carrying a camera that I probably have learned the most from. Just about everything I know I have learned from photography. 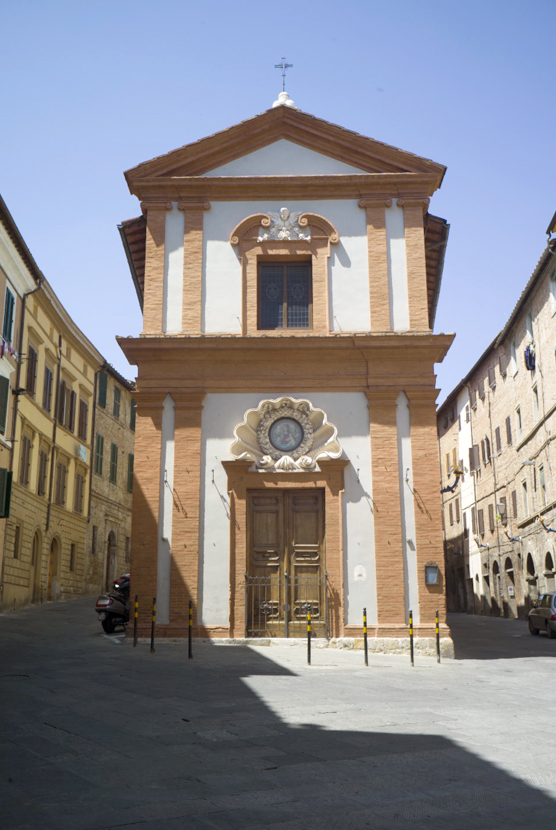 On a quick dash to Siena to pick up eyeglasses that had been fixed I had some crowd time on the streets. As always it’s unendingly fascinating to watch our species and witness the parade of shapes, sizes, gestures, makeup, clothing, companions, family, emotions, and all the combinations that, as Shakespeare would say “…flesh is heir to.” 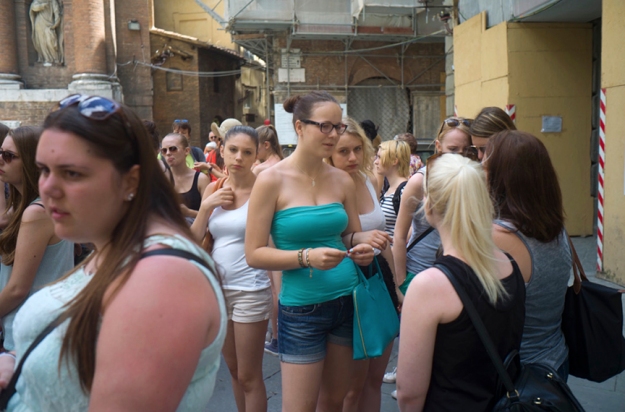 Siena’s Campo is one of the most spacious piazzas in Italy, and one of the most unique. It is a fan-shaped, brick patterned, space with 9 divisions representing the different contradas, or quarters, that existed when it was built. It functions as a giant sun bowl filled with people usually lying on the bricks and chatting, sleeping, eating, or playing. But what has always fascinated me – and I would like to make a time lapse video of this – is when groups agree to meet in the Campo they usually avoid the heat of the sun by standing in the shadow of the clock tower, and as the shadow moves, like a sweeping sundial’s pointer, everyone moves with it.

I can imagine a very funny short film showing the changing texture of the crowds and varying amounts of people filling the full length of the shadow. This early June morning shows only the first sets of tourists.

I usually have been fairly straight ahead when I photograph. I like standing at my own height, not stooping or bending, basically looking at the world from eye level. It has suited me for 50+ years, but here I was in Il Campo, the vast piazza in Siena,  a place I love to go to. It’s a fan shaped piazza that is made of old bricks and it slopes downhill making it a great place for people to lie down in and take the sun, or just hang out.

So imagine my surprise when I opened my eyes and saw the tower from this position. Instead of rolling over and becoming right side up I decided to experience the dislocation and see what making a photograph like this felt, and looked like.