While I was working with these objects I picked up an old funnel that I used a year before and found inside the funnel another small clump of ‘smoke bush’ fluff which had settled into the form of the cone shape of the funnel. The color and shape seemed to relate to the conical tops of the tin objects so I put it on top of the round form just to see what would happen.

Still life seems to me to be a form of play in which the objects have a life of their own, and as I move them around the stage something comes from them, a presence, a spirit, even sometimes a sense of their potential force. I add and subtract and then sit and look, waiting for something to speak to me or suggest another move. In that sense they are always open to subtle changes as I become familiar with their character and how it projects into the space.

This is still new to me and I am finding a kind of pleasure in contemplation that I hadn’t known came with the territory of the still life. 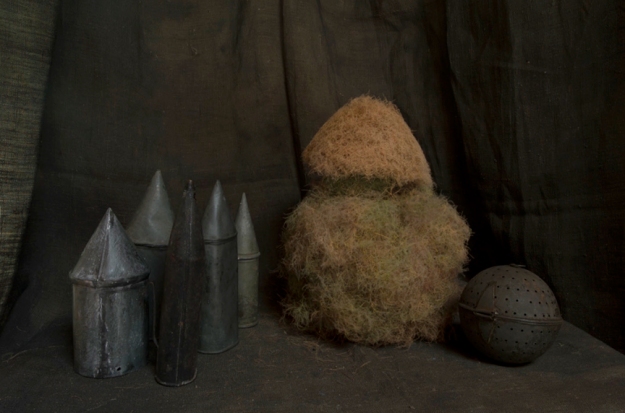