Some years ago, on a visit to the Metropolitan Museum of Art, I found myself in the hall dedicated to Roman culture, a place I have always loved to wander through, but this time I was moved by something I had seen dozens of times before but was never stopped by in this way.

The room has several stepped rows of sculpted marble heads of Roman men, women, and children, from what might have been all walks of life, although it’s hard to know since only the heads are there and not the clothing which would certainly tell us more about them. But they seemed to be worldly, political, wealthy, and of a class that had their portraits done, whether for funereal purposes or as home decor. As I walked the line and carefully looked at each face they seemed to come alive to me, alive in the sense of discovering the individual in the stone as I slowly moved my vantage point around for each head. It was as if at a certain point, ‘there it was!’ the revelation.

I became excited enough to consider making a series of all of these heads where I would try to find the essential position where the spirit of the person emerged from the stone, as if they were sitting for a portrait with me. This idea came before my current interest in still lives, but I see now that it was a preview of this new interest, and it is still one I would like to pursue. However when I called my contacts at the Met the idea was met with a kind of slack interest, and a sense that it was too much trouble for them, and I was off to Europe soon after, so I let it drop.

Here, in a friend’s workshop in Tuscany, is a head of Mussolini, and as I considered it I could see that this notion I had of finding the essential character in the stone is still a workable one. That egomaniacal bastard is in there somewhere. 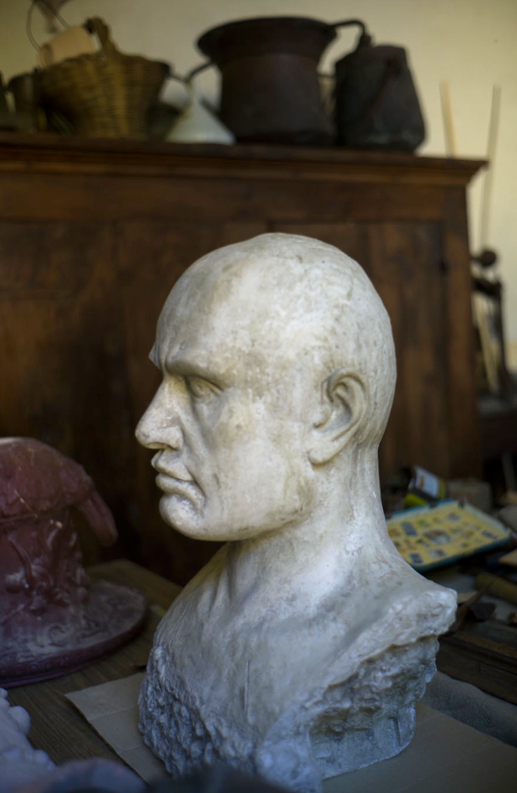